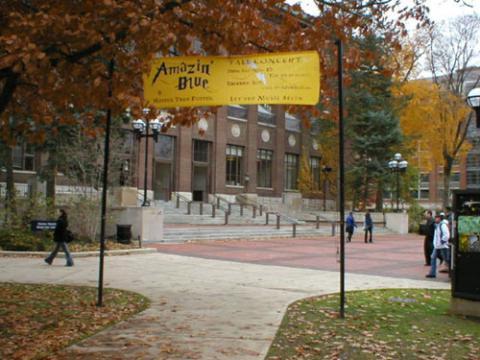 What is the advertising reservation process?

The SORC coordinates the use of low-cost campus advertising services, including Diag boards, Diag banner poles, table tents, and the Michigan Union banner. There are over 1,500 eligible student organizations and dozens of university departments vying for the spaces, which are affordable and effective. Consequently, the reservation process is highly competitive and must be conducted systematically in order to be fair. If you have never participated in this process before, it can be overwhelming. Please read through this page carefully and call or email SORC if you have any questions.

SORC conducts a random drawing at the beginning of each semester for reservation appointment times. SORC does not assign locations for Diag boards and Diag banner poles; rather, each group is assigned an appointment time at random. Earlier appointments have better selection of the "good" spaces. Spaces that remain open after appointments are available on a first-come, first-serve basis. For the Michigan Union banner and table tents, there is no appointment. Groups will either win one of the available spaces, or not.

Dates change every semester, but the full details of the reservation process are announced via e-mail about one month before the end of each semester. To get on SORC's mailing list so you will receive this announcement, click here. If you have not heard anything by early December (for winter), or late April (for Summer), or mid-July (for fall), go to the main page of the SORC website for links to the applications and further details.

Why is this random?

From the 1970s until 1996, Diag board spaces were reserved on a first-come first-serve basis. Diag boards are effective and inexpensive, so they grew steadily in popularity. The last time it was first-come first-serve was 1996, and when the Manager left work the night before reservations opened, several people were already waiting outside the Union with their sleeping bags to reserve spaces the next day. By morning, there were over 100 people in line. SORC staff tried to be as efficient as possible, but the people who were near the back of the line had to wait over five more hours for completion of the reservations in front of them, and by then, many of the spaces were booked solid, and they got nothing.

We knew there had to be a better way. A lottery system was devised and launched in 1997. With some adjustments, that system remains in place today. Banner poles were added in 1998, and later table tents in 2006, and we eventually adopted the lottery system for the same reasons - too much demand; not enough supply.

We have conducted surveys periodically to see if our customers prefer to go back to the old way. Once they hear this story, there is inevitably an overwhelming preference to keep the lottery. We hope this explanation sheds some light on the subject for you. If you have comments on the reservation process, please complete our online comment card.

When do reservations take place?

There are three reservation periods each year:

What happens if there is a miscommunication in my group, and we don't submit our application on time?

Unfortunately, you will not be able to reserve Diag boards or Diag banner poles during the initial round of appointments if you did not submit an application on time. Spaces that are left-over, or are not paid by the deadline, are available to reserve on a walk-in basis starting a few days after appointments are completed.

What happens if I miss my appointment?

Spaces that are leftover, or are not paid by the deadline, are available to reserve on a walk-in basis starting a few days after appointments are completed.

What if my organization's president sends me to the appointment but I don't know what to reserve?

SORC clerks provide as much advice and guidance as possible, but unless you know some basic information, you will not be able to make a reservation. You will need to know:

This will largely be determined by budget.

Can I apply for an appointment now?

Summer lottery applications are open from approximately mid-March through late April. If demand is low, there will not be a Summer lottery; requests will be accepted as they come in.