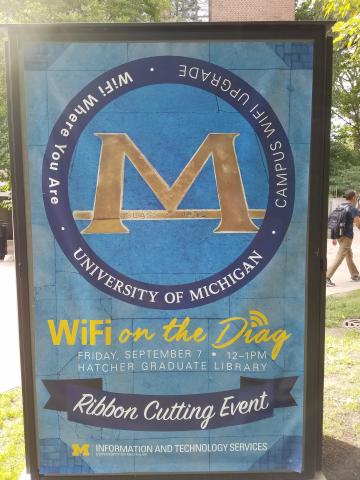 Effectiveness of locations varies according to each group's needs. For example, if you are advertising for a weekly meeting in the Union, your need would be different than someone advertising for a concert at the MLB. But each location has 1-4 sides. SORC maps are numbered such that side "1" is best, "2" is next best, and so on. This may vary according to your needs too, but it gives you an idea of historical preference.

There are four classifications of Diag boards, based on location and orientation:

In the summer of 2018, several spaces on the Diag were reconfigured from 3-sided to 4-sided and repositioned, plus one completely new 4-sided location was installed.  This affected their orientation, visibility, and desirability. Below are the rankings of locations (interpreted by SORC staff) as of August 27, 2018.  Please note that the rankings of new locations could change in future semesters, based on experienced demand. Always check the maps below rather than versions you might have printed in the past.

Note:  we sometimes change the numbering of locations based on popularity and construction projects that change foot traffic patterns.  We never do this in the middle of the year; this is typically changed over summer.  Be sure that you are looking at a current copy of a SORC map; if you printed one, it might no longer be accurate.